We are in a state of climate emergency, and the construction industry and existing built environment is the major factor to the crisis. As a landscape architect, I am not able to stop climate change, however, I feel responsible to make our living places more sustainable and resilient and encourage more responsible lifestyles.

I chose Spike island in Bristol, one of the most vulnerable places to sea level rise and extreme weather conditions in England, to design a conceptual urban landscape which evolves with global warming, and helps to adapt people's lifestyles to the ongoing climate change.

I designed a climate-change resilient landscape system, and developed long-term regional and site strategies by making our urban landscape evolving with global warming, and utilising the water to integrate people into the climate emergency.

Climate change is happening. As a resident on planet earth, it is my moral responsibility to protect our future environment by living a sustainable lifestyle, while as a landscape architect, it is not my job to prevent climate change and global warming from happening, but to make our built environment more resilient to the potential risks of sea level rise and extreme weather conditions.

For the final project of my MLA program in the University of Edinburgh, I chose to propose a conceptual urban landscape design which evolves with the ongoing global warming, and helps local residents and visitors to adapt their lifestyles to the climate change.

The design site is Spike island, Bristol, which is highly vulnerable to flooding due to sea level rise and storms according to the flooding map of England. I conducted research and analysis to see how climate change would affect the site and the whole regional area. 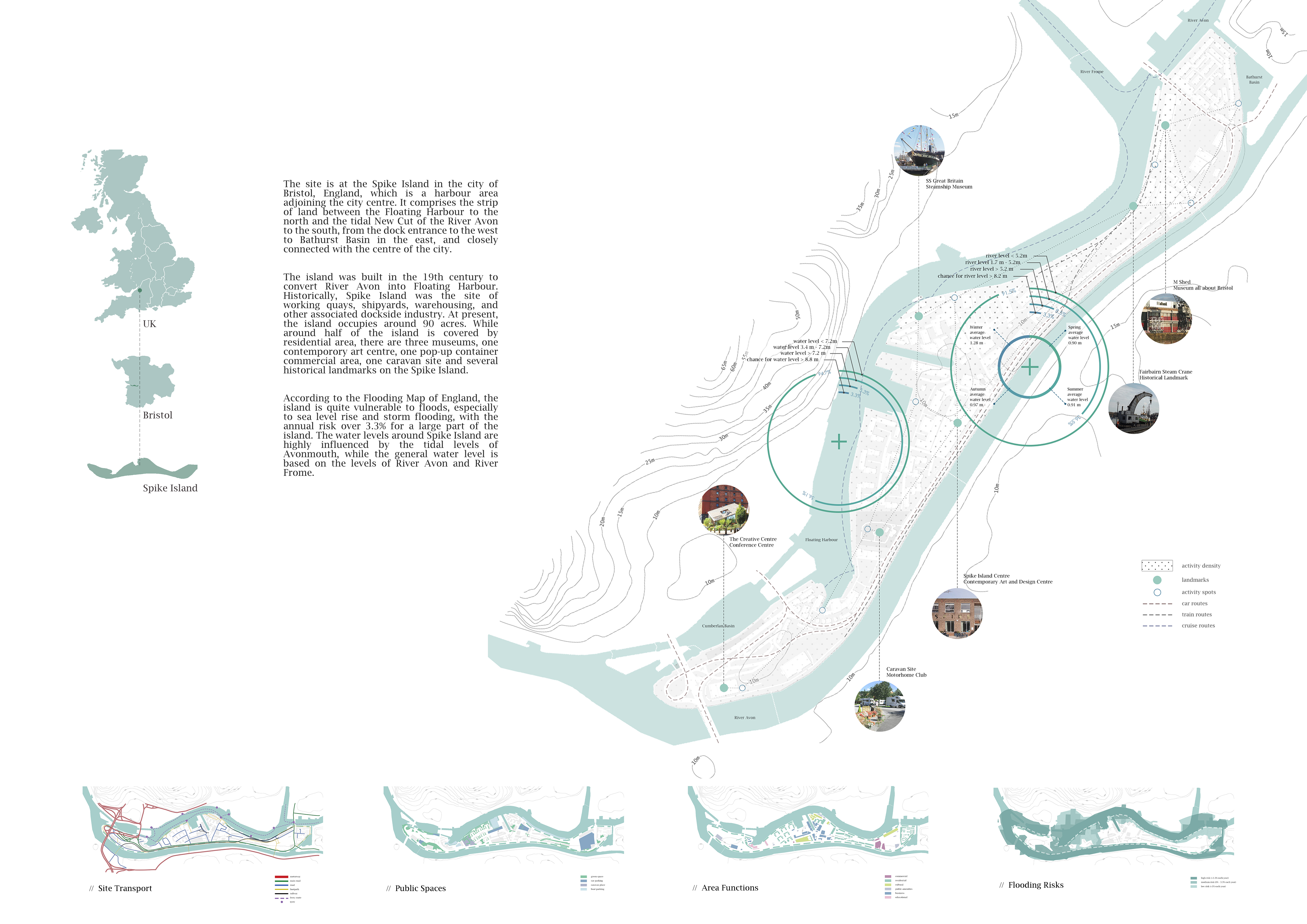 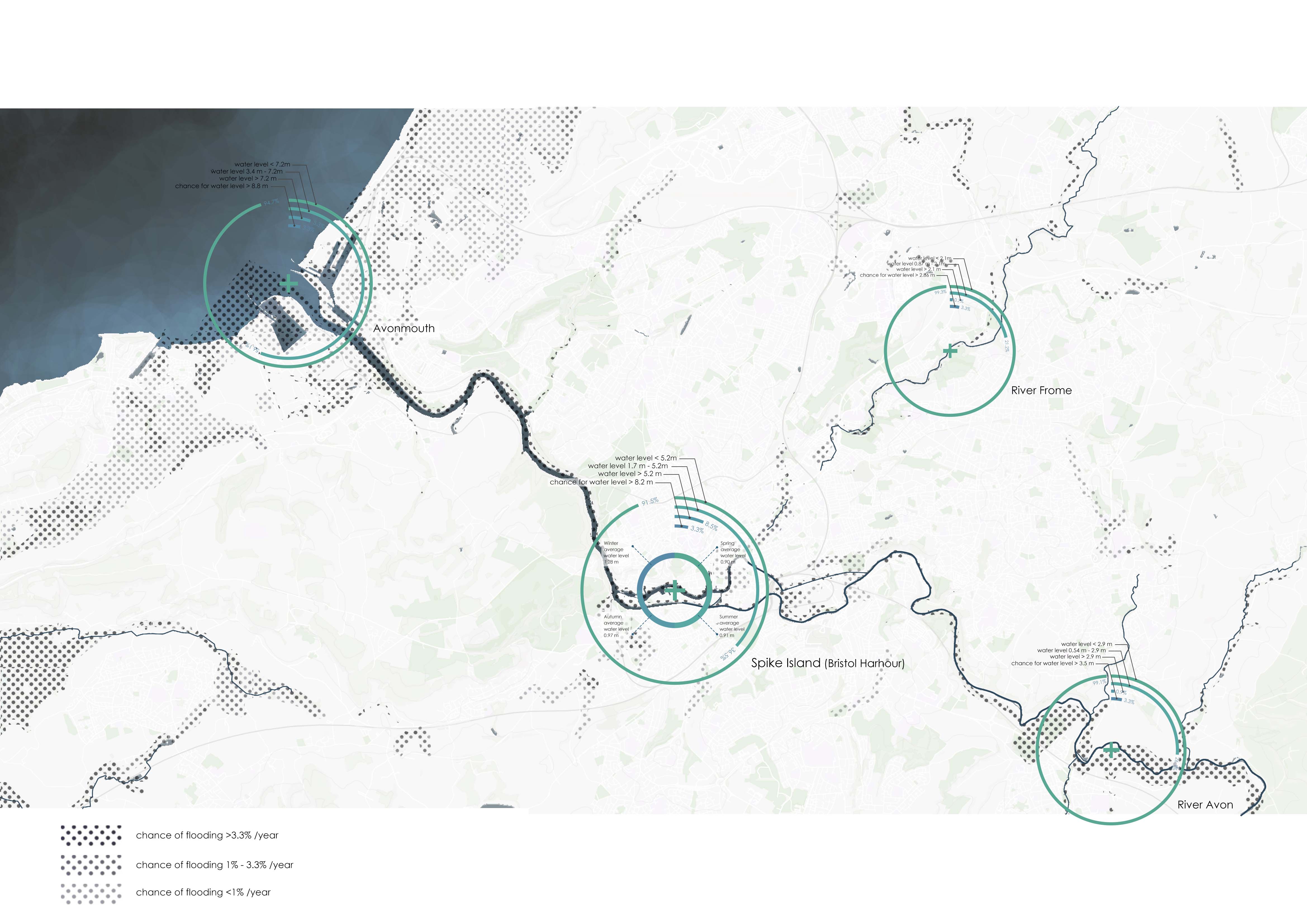 After the site study, I did another research on what landscape and architectural methods have been built or designed to cope with climate change. Based on the research, I built a technique library which follows the discipline of resist, delay, store, recycle and discharge the overflow water, and provides meantime opportunities for people to get involved with.

For example, the water plaza could be used as a normal public plaza in the sunny days. When it is raining, the plaza would collect overflow water in the neighbourhood, utilised the water and discharge it later at a controllable rate.

By applying these methods with urban landscape design techniques, our urban environment could be more resilient to the potential risks of sea level rise and extreme weather conditions such as thunder storms. 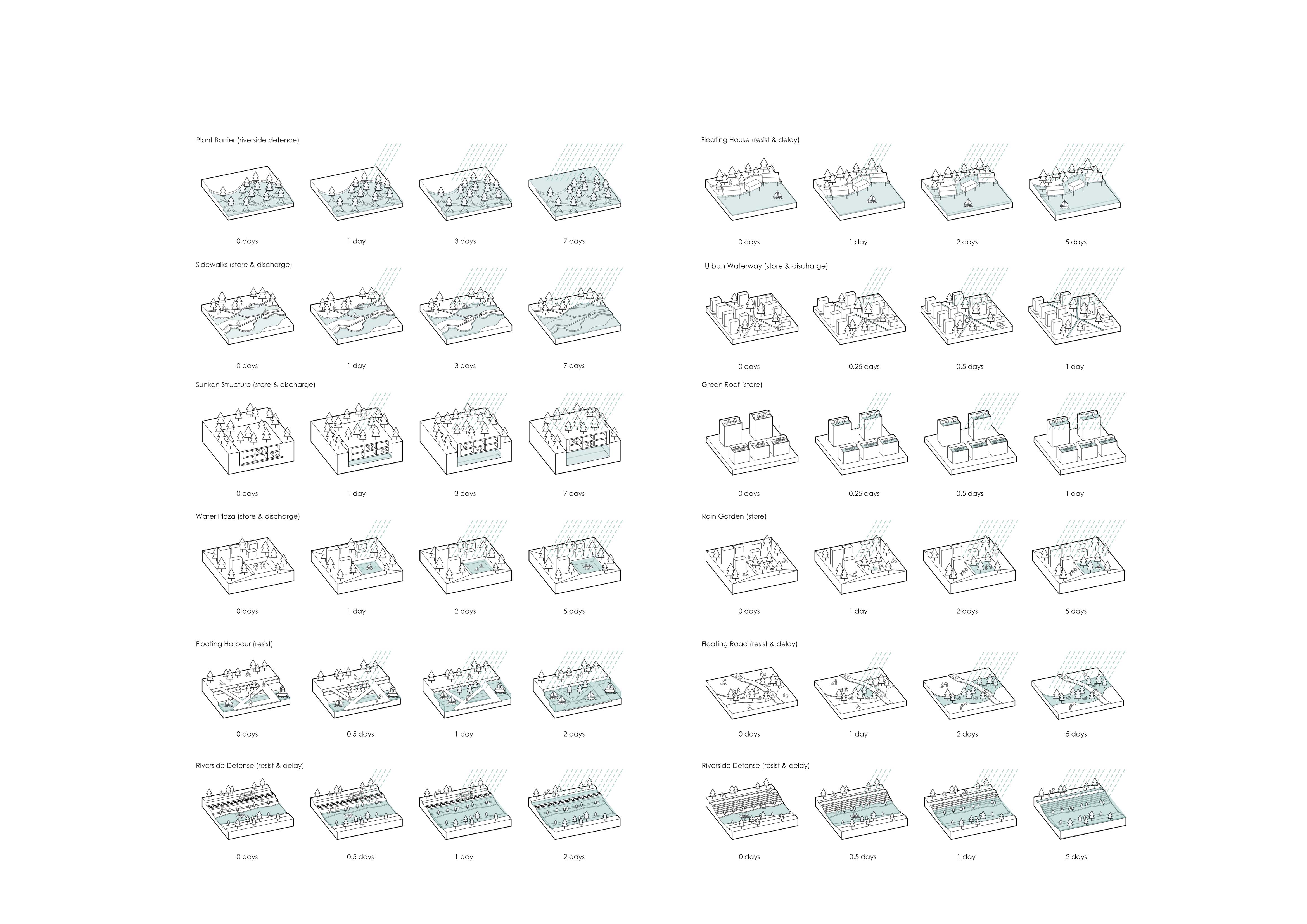 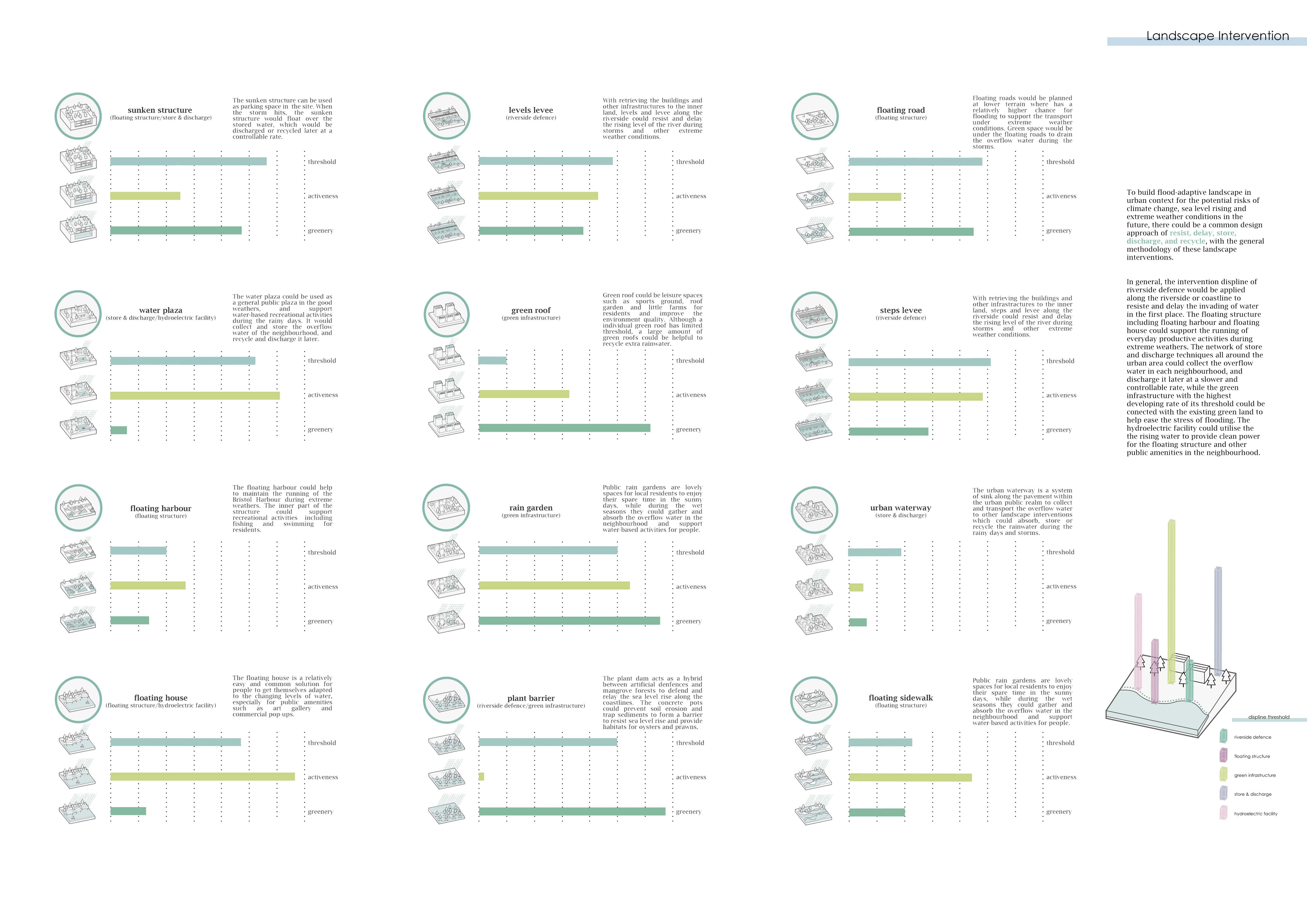 Based on the same discipline of resist, delay, store, recycle and discharge, I designed the regional strategy and site strategy. Defence interventions including floating structures, green infrastructures and hydroelectric facilities were applied along the coastline, where was the most vulnerable area to sea level rise. Along the rivers, green infrastructures were applied to delay the rise of water levels. For inner land, existing green spaces would be used for storing and discharging extra water flow.

The climate change would come in phases, so would the climate resilient landscape infrastructures. The proposed site strategy aimed to gradually help people to adapt their lifestyles to the changing climate. 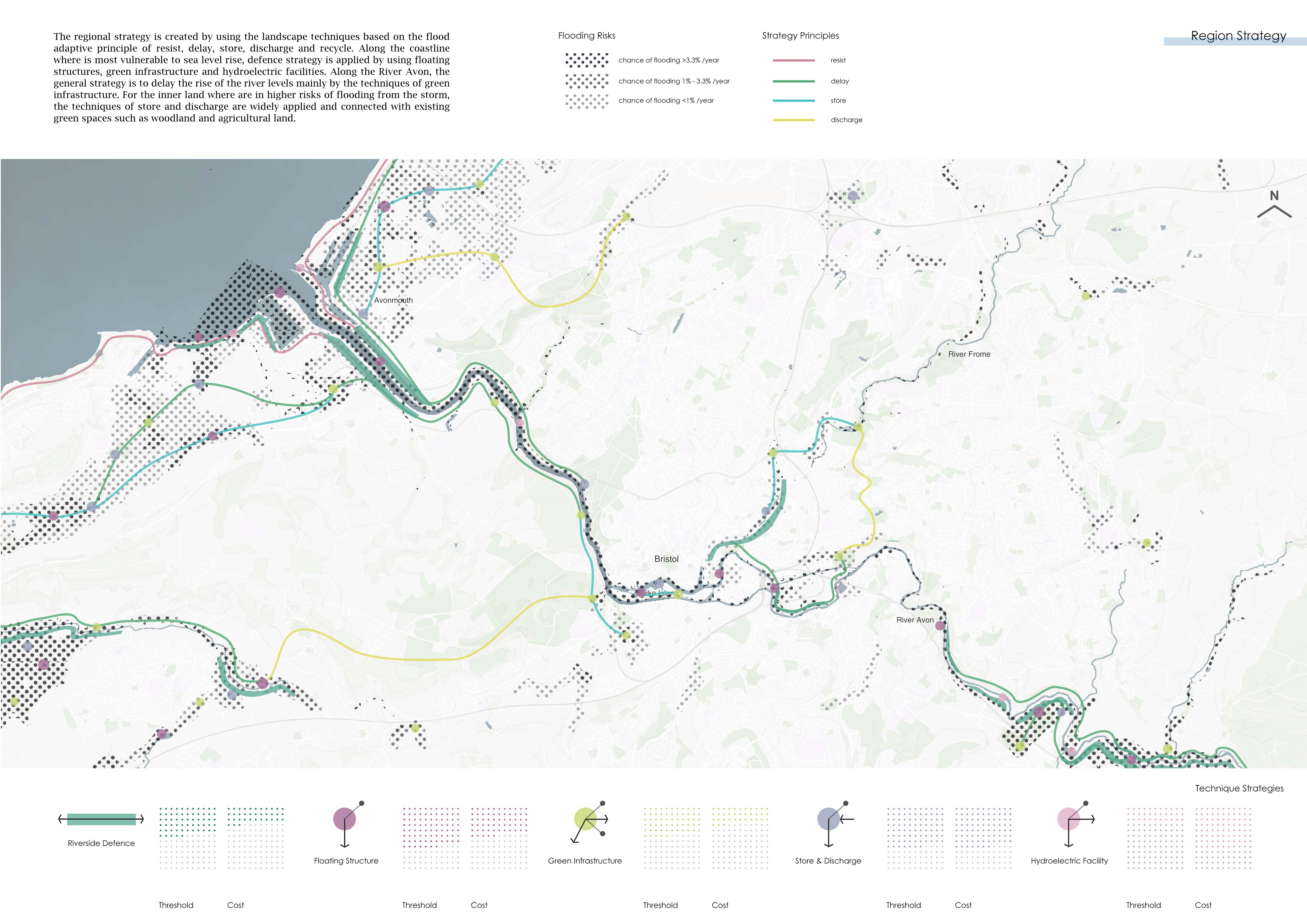 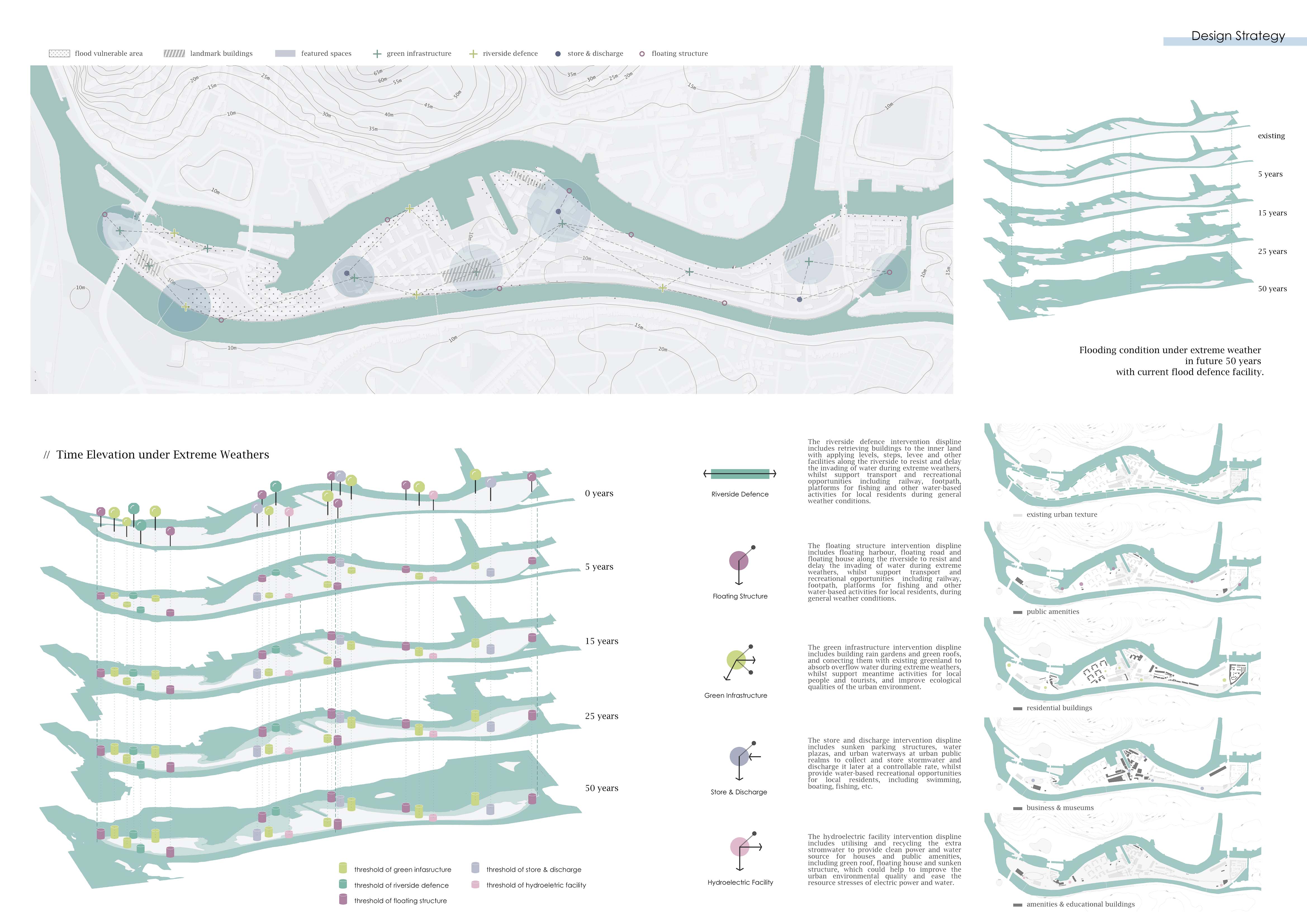 In the last stage, I produced a master plan to show how the urban landscape of Spike island would evolve with the global warming based on the stage three design strategy, and how we could provide more opportunities for people to adapt their lifestyles with the changing climate.

By introducing more water-based activities into everyday life, the concept of climate emergency could be implanted into our community, which might encourage more people to fight against climate change and protect the future of our planet. 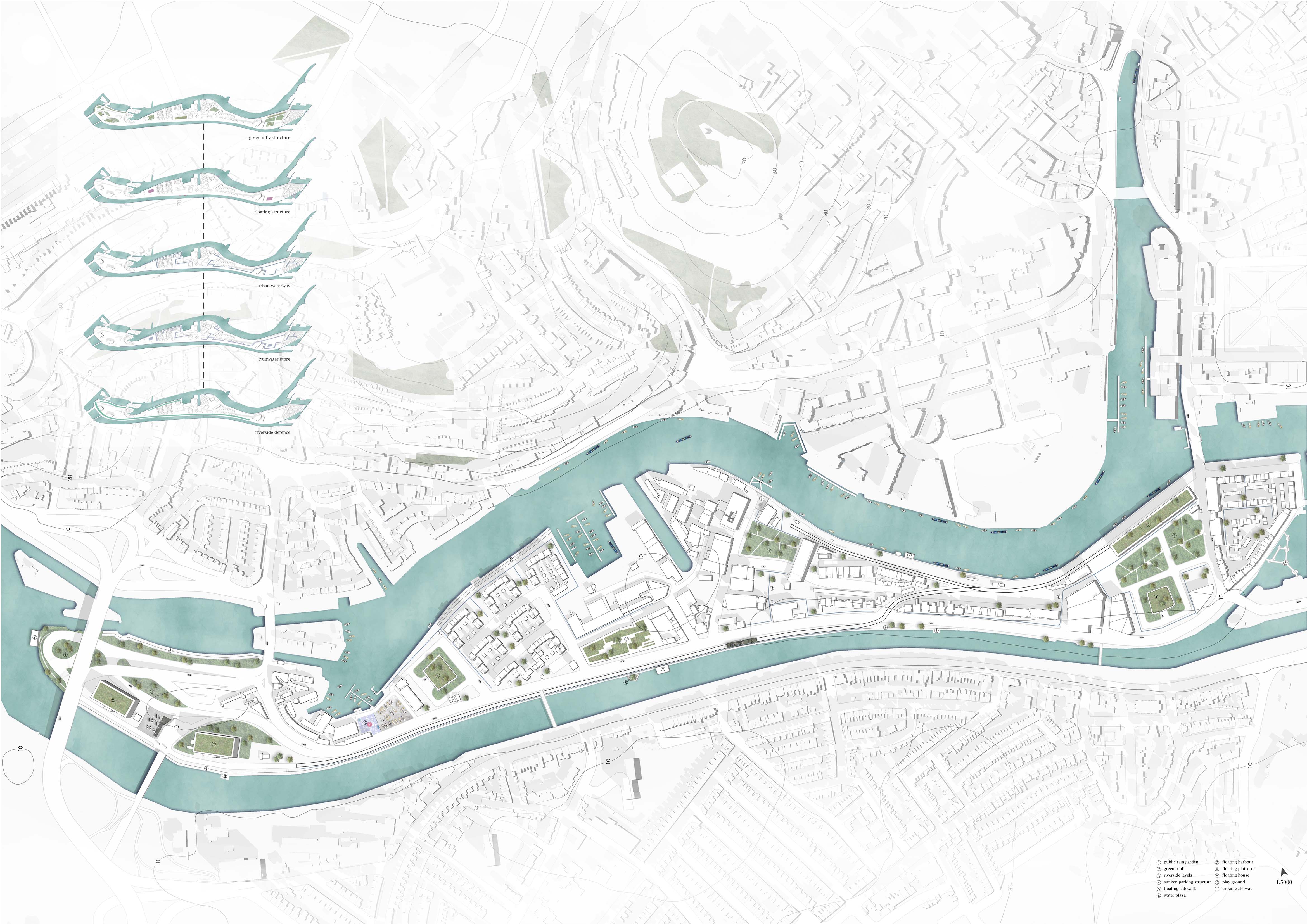 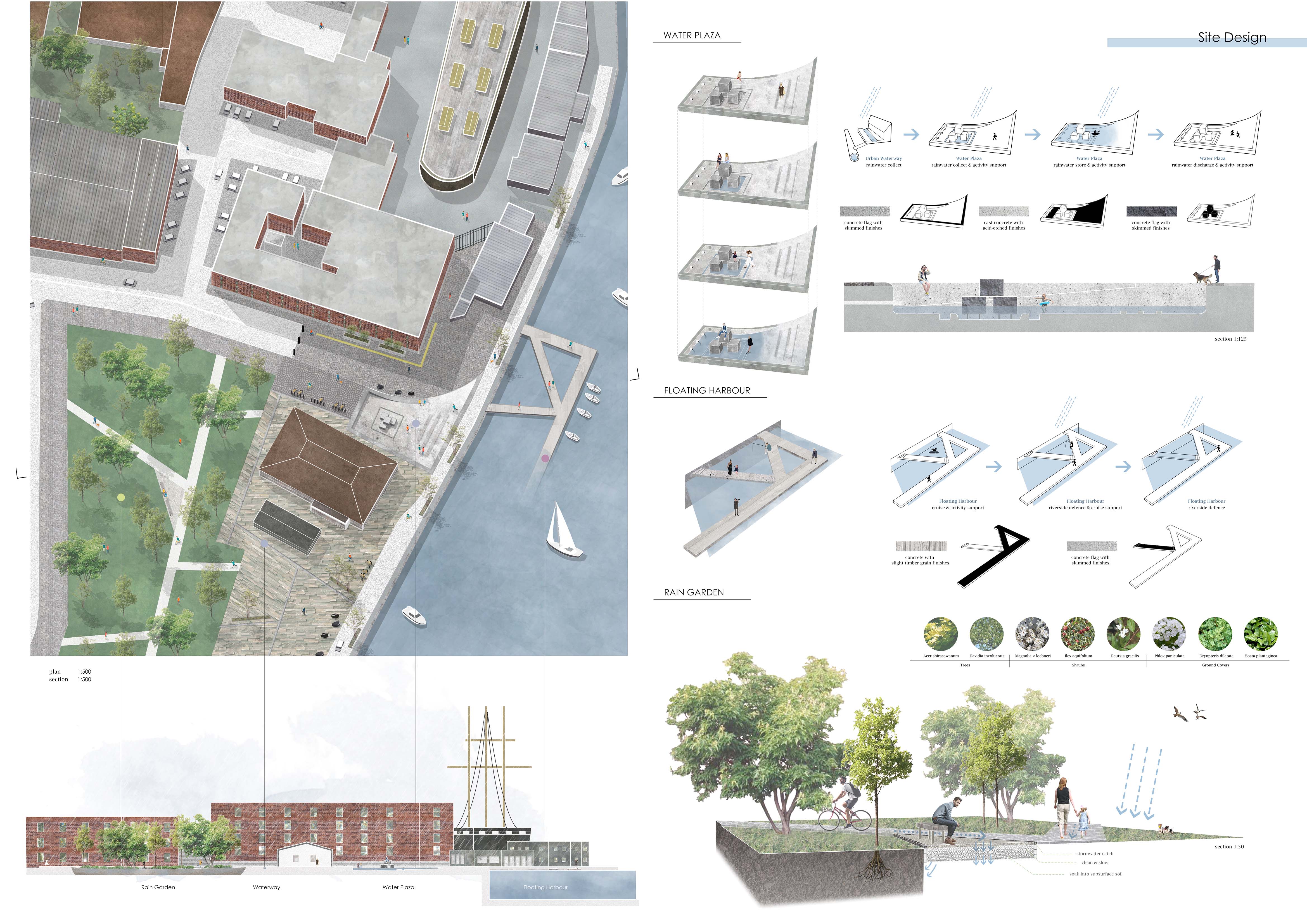 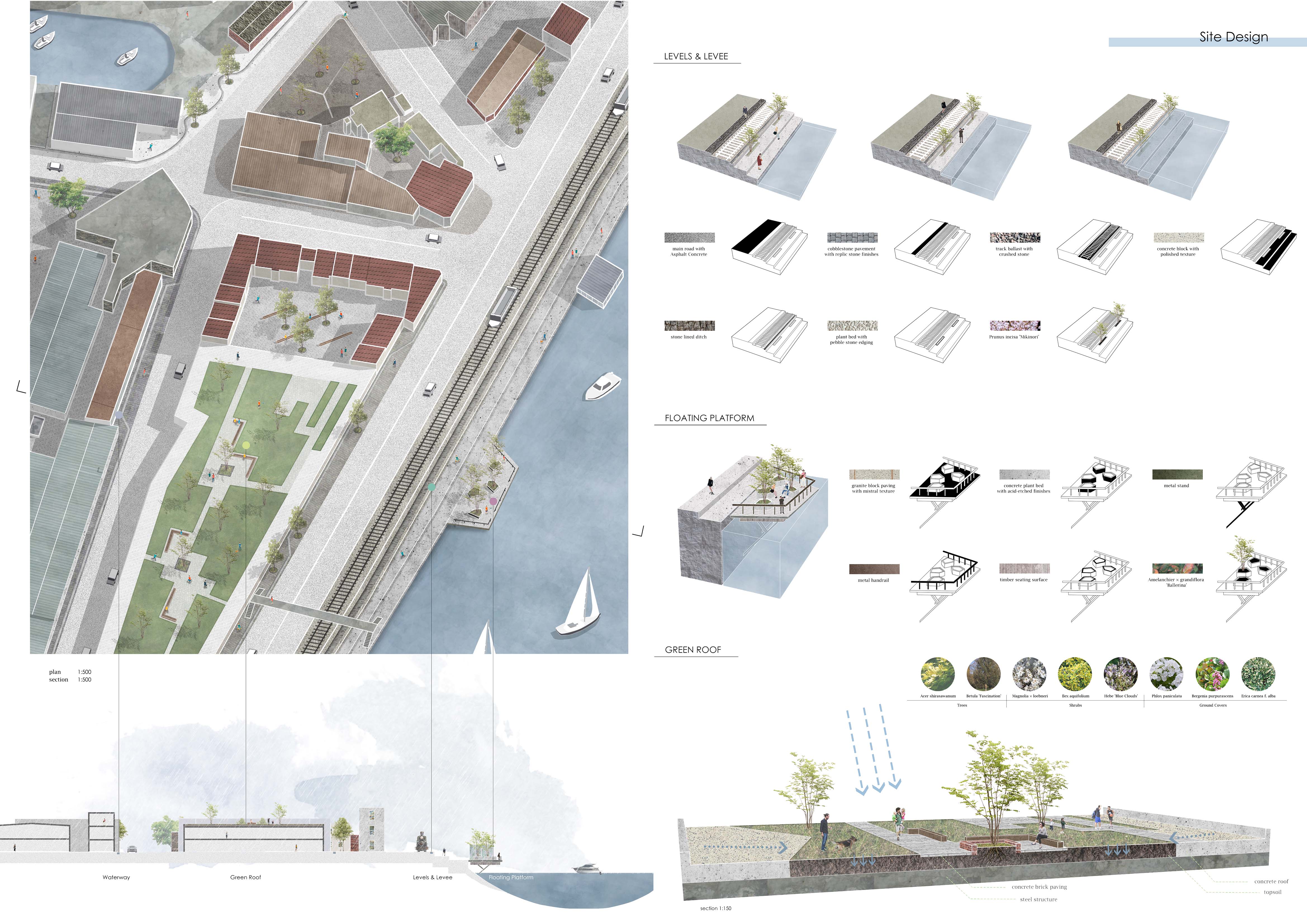 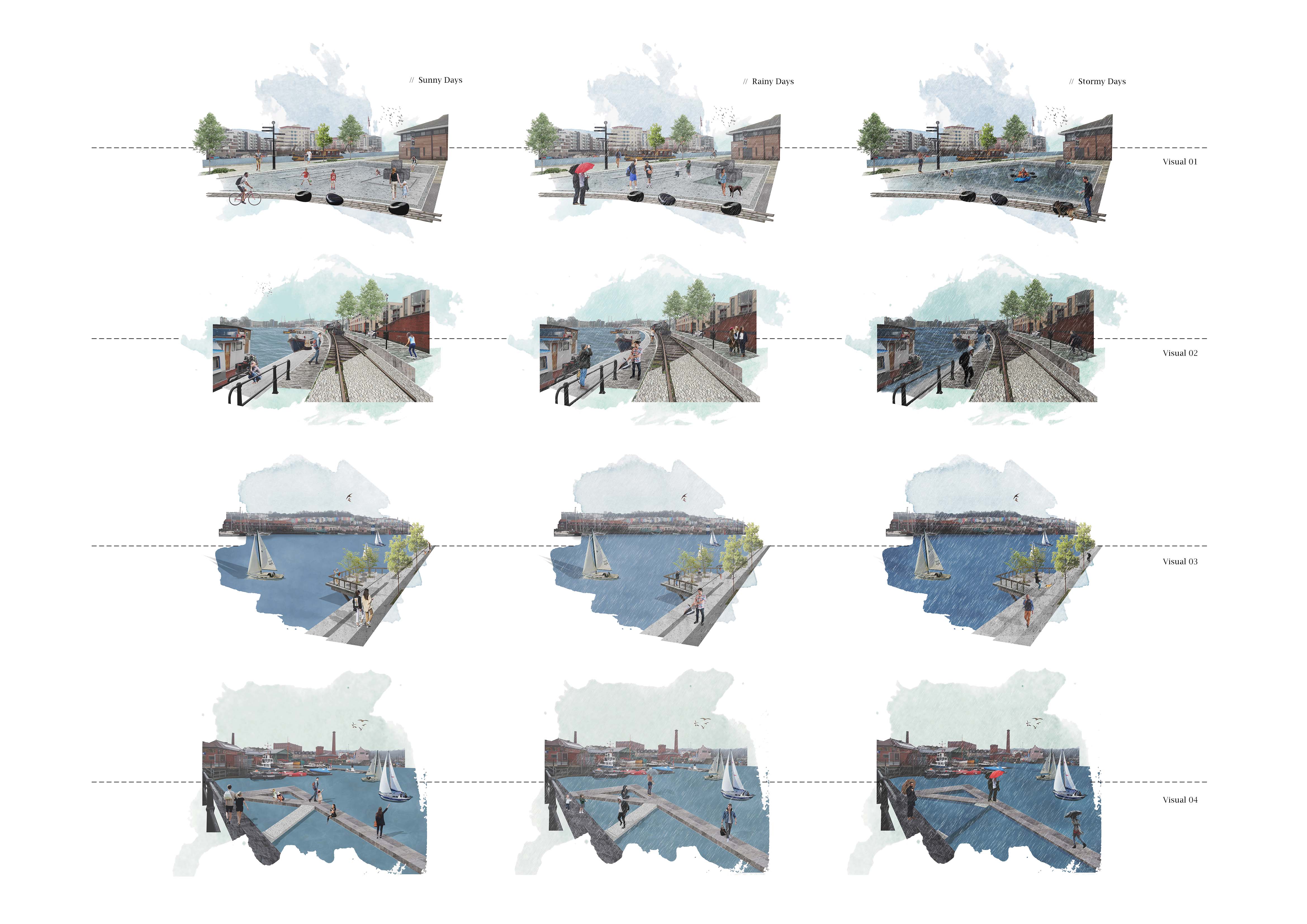