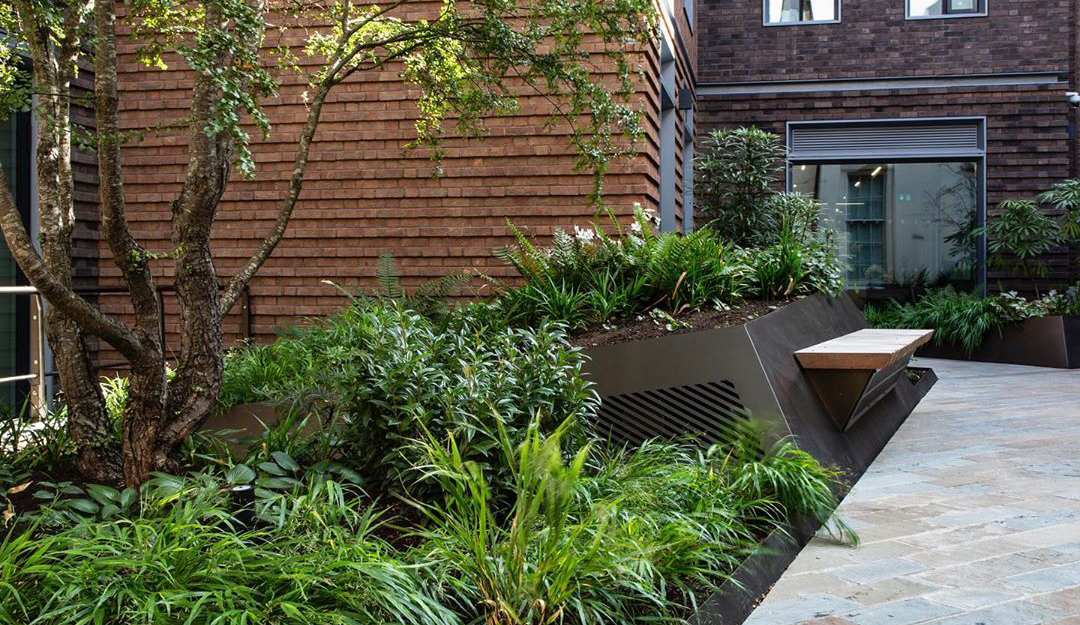 Appointed to design its back courtyard garden, we created a modern and elegant space contrast to the intricate brickwork of the architecture, as well as providing a beautiful and healthy urban oasis for local residents and pedestrians to take a stop or navigate through. My main tasks were iterating the design in 3D and delivering the construction package.

The building façades, whilst distinctly contemporary, sensitively reflect the richness, grain and materiality of the surrounding context. The textured and folded surfaces go a long way in amending the quality of the street that has been compromised by the larger buildings on the eastern side, whilst creating interest through dynamic architecture. 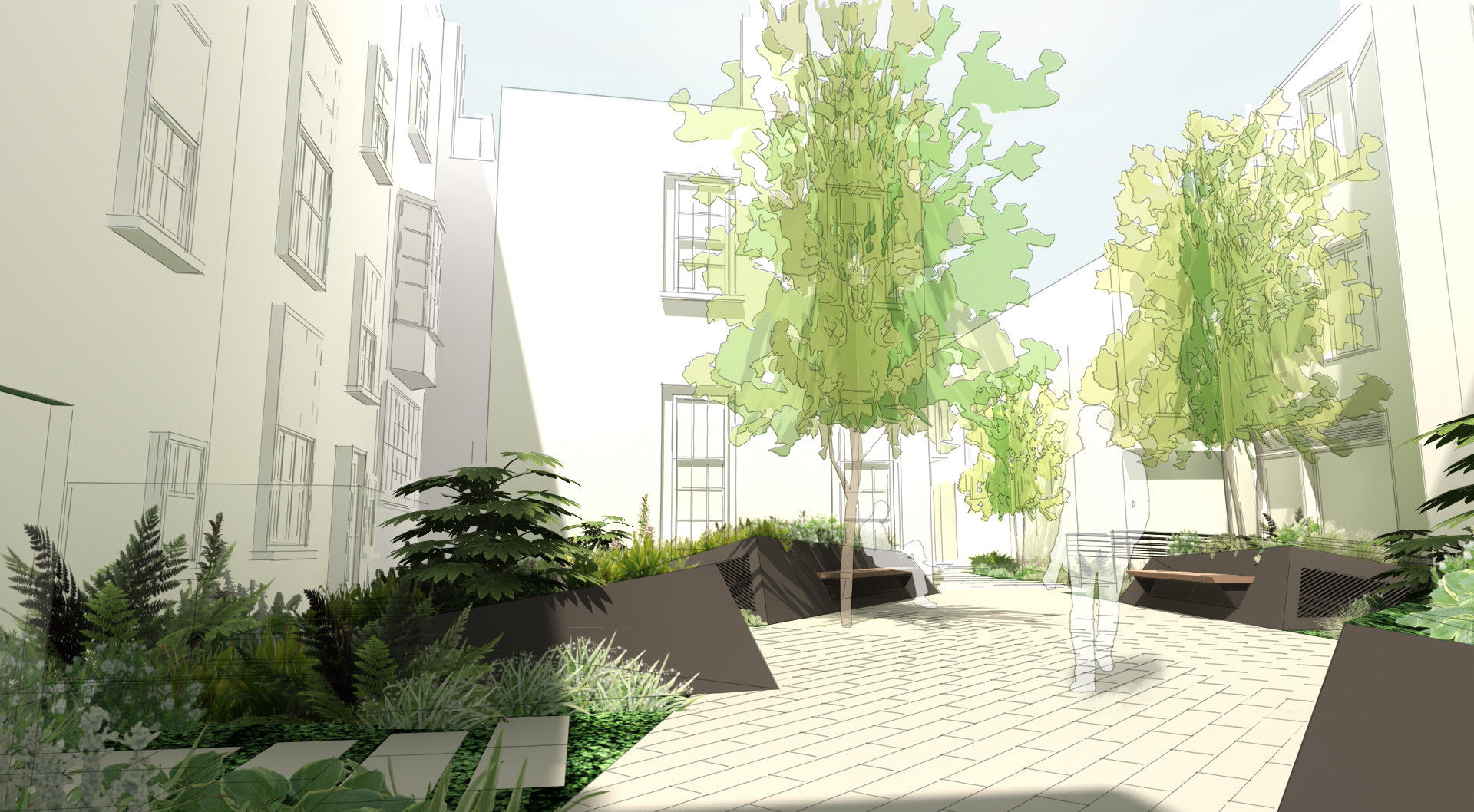 visualisation of the courtyard garden 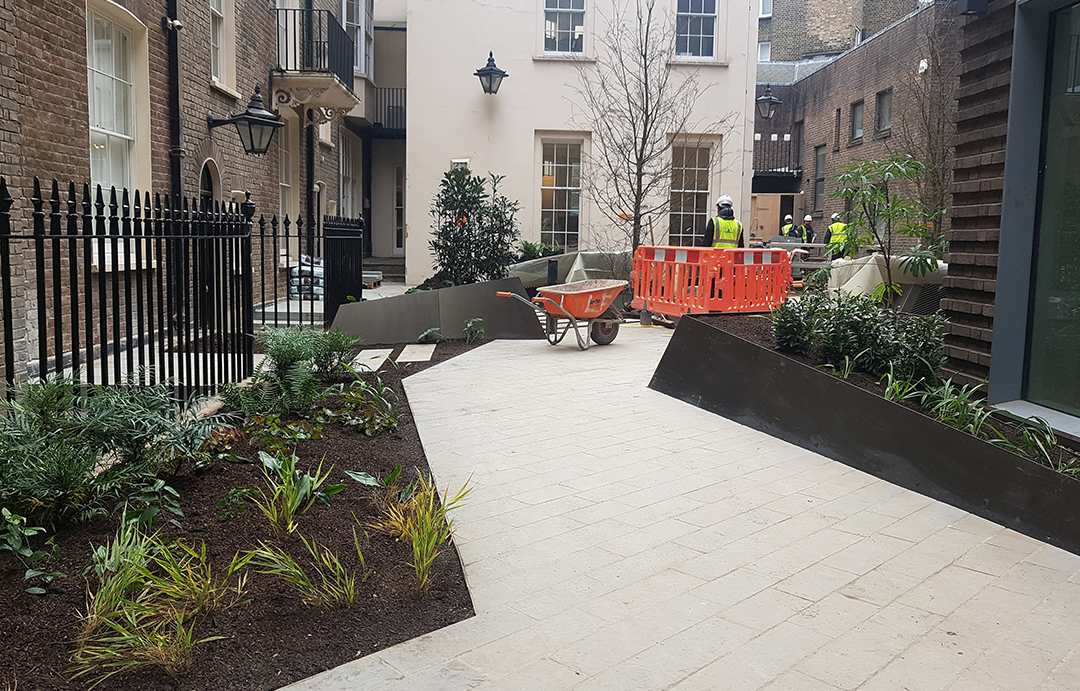 construction of the courtyard garden in progress

The courtyard garden is at the back of the development, connecting the passage of Whitcomb Street and Suffolk Street for not only residents of the buildings, but also pedestrians to walk cross.

We proposed a simple, modern, elegant design with inclined metal planters, diagonal yorkstone paving and a characteristic planting palette to make contrast to the delicate historical identity of the site, yet compile with the geometric brickwork of the architecture.

While connecting entrances of the buildings, the courtyard is also open to the public. We also tried to create an peaceful urban oasis for pedestrians to navigate through and explore as a serendipity in central London. 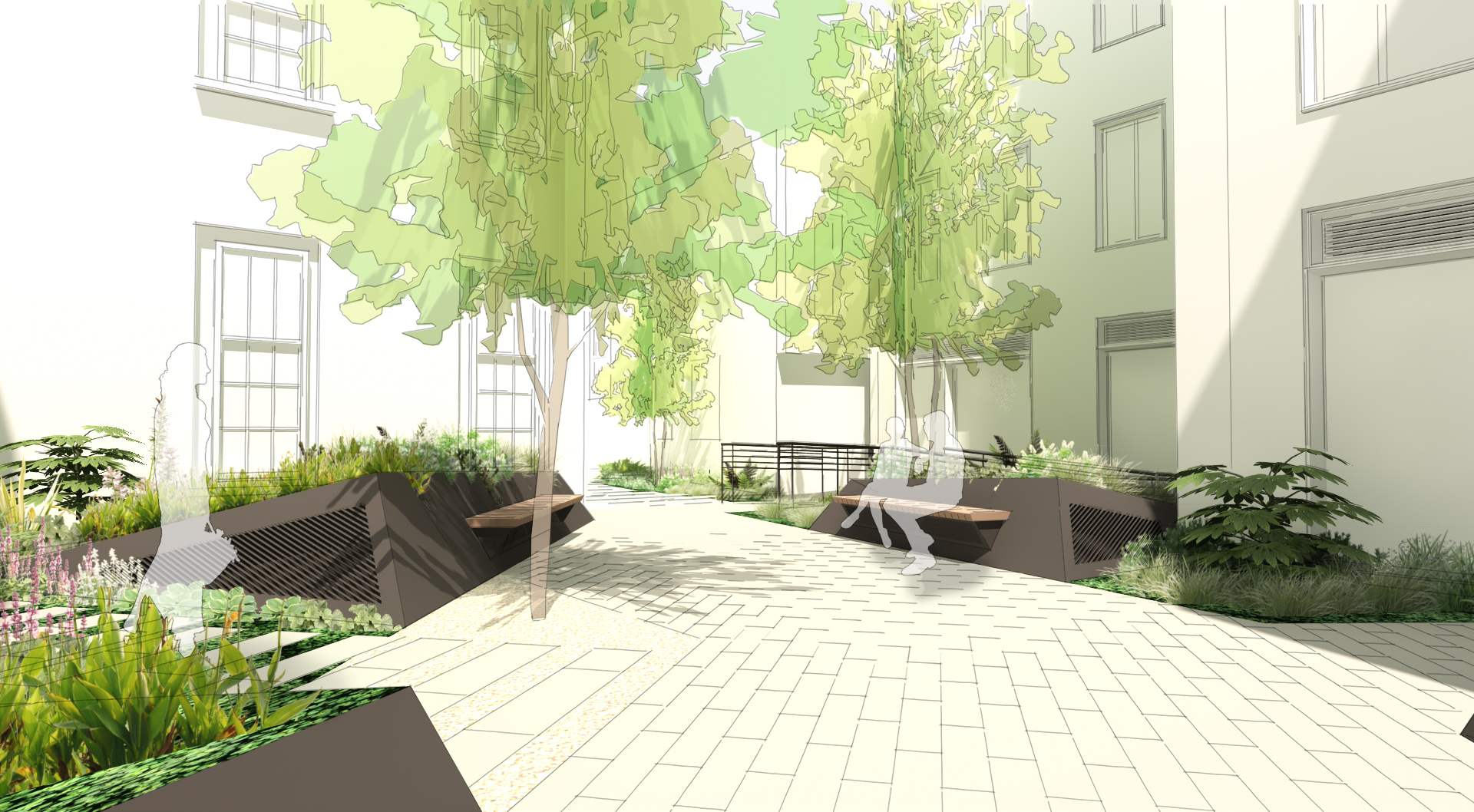 Although the site scale was small, and the context seemed to be quite simple, we had to solve a number of different problems to make the design works with all sorts of constrains.

As the architecture was built above historical basement vaults, the courtyard garden would sit on a very complex podium base, which means we needed to deliver a series of detailed construction solutions for different parts of the landscape sitting on different slab levels. We needed to design a well-functioned drainge system for both the hard surface and the planting areas, to let the garden properly drained after rains and the plants to thrive.

The biggest problem we had during the design process was the ventilation. After receiving the information that ventilation was required in the courtyard garden, we tried to keep the diagonal geometry design and combine the ventilation with landscape elements. The solution we found was to hide the ventilation under the planters, however, after diving deeply into the details, we were struggling to make it work:

1. The ventilation outlet on the slab is fixed, and the planter surface had to be within a certain distance from it;

2. The required ventilation surface area was larger than we expected, so we needed to adjust the planter design to meet the requirement whilst aligning the proportion and inclined angle of the ventilation planter with other planters, and making the overall landscape layout work;

3. The ventilation channel ate most of the space in the planter, it was hard to keep a decent soil depth for plants to survive;

4. Bespoken benches were designed on the ventilation planters to provide seating for people to rest, so we also needed to figure out how the seating could work with the ventilation and structure of the planters.

As the model maker in our landscape team, I tested and iterated the design in 3D model for hundreds of times and coordinated with the engineers over and over again, only to find a solution that makes the ventilation planter work while keep the aesthetic and functional proposal of landscape design. We did it.

After confirming the feasibility of the landscape design, we produced a detailed construction drawing package for it to be built by the contractors. We also delivered a detailed system for the bespoken inclined metal planters, which has been turned into a standard product by the manufacturer.
‍ 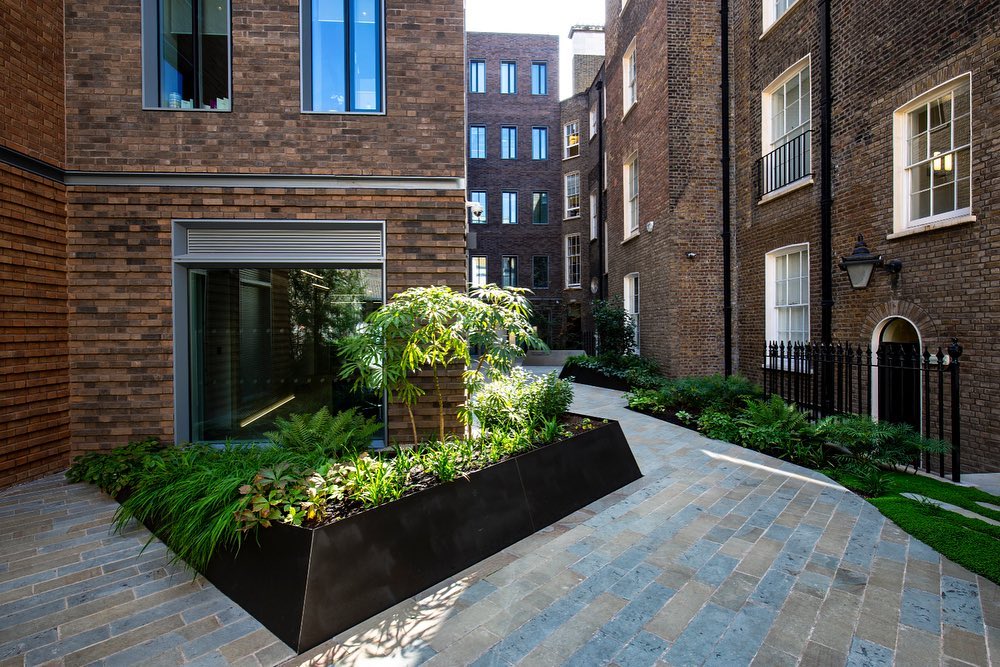 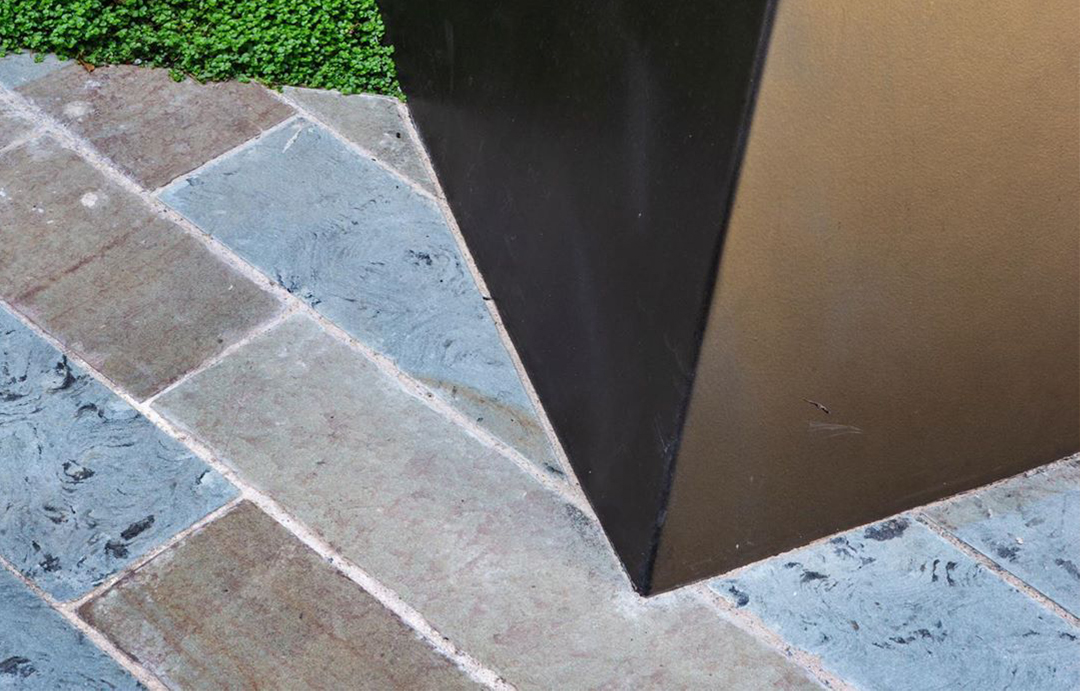 At the construction stage, we encountered several problems again when the scheme was being built, which have been solved by us cooperating with the client, contractors, manufacturers and workers on site.

Now the Hobhouse Court back garden has been successfully and beautifully built and used by local residents and pedestrians. We have received a lot of positive comments of this peaceful urban oasis from the client, the design team, other skate holders, local residents, and people who unexpectedly encountered with it.

Could it be your next serendipity in central London? 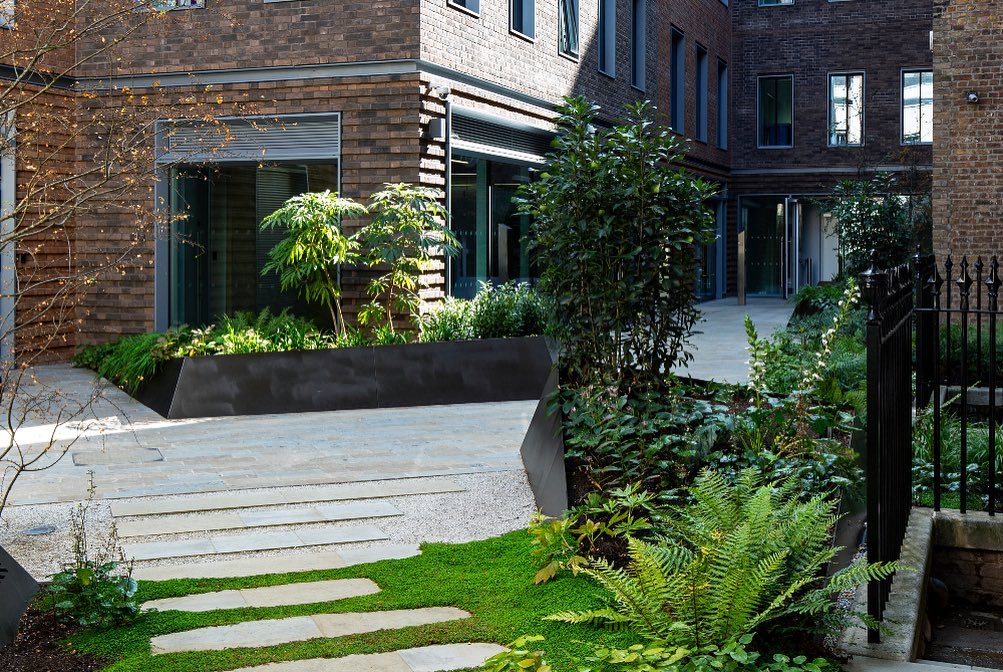